On the eve of Victory Day in this blog, the story will go about the restoration, for our country exactly the legendary car – GAZ AA, it’s also the famous “Lorry”. So it was called because of its nominal carrying capacity of 1.5 tons. Immediately I specify – nominal, because according to the testimony of front-line drivers, they drove not in one and a half tons in the lorry, but as much as needed to be translated, since the motor allowed it to be done. Initially, the GAZ-AA was a 40 hp motor. The compression ratio is impressive – 4.25. On our car, there is a later engine, almost the same installed on the passenger “emku”, GAZ-M1, which became 10 “mares” more powerful (50 hp). This power unit is known for its monstrous unpretentiousness, and if it could kill something, then only extremely low qualification of drivers and support staff of the time. However, there are also pluses: in the war, there are cases when, after the breakdown of babbit inserts, they were rather successfully replaced with a piece of leather officer belt. With such “liners” the car could drive some more distance to the venue for a better repair.

Our lorry until the end of the 80s worked in one of the Krasnodar convoys and after the cancellation hit the new owner’s garage. At first, she was still driven out to parades and exhibitions, but soon the car began, frankly, to crumble and was put into the garage, where she stood until 2015. 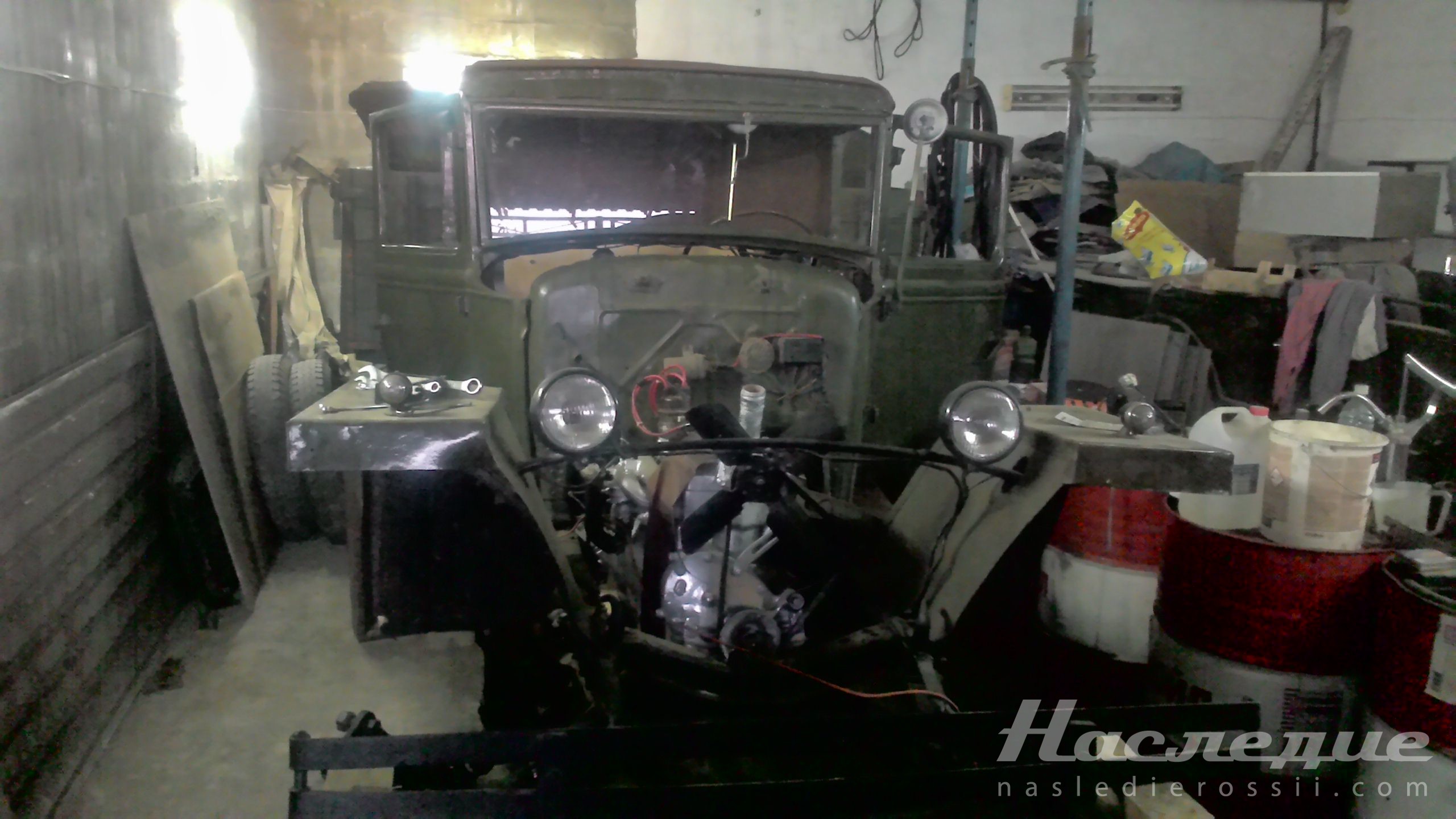 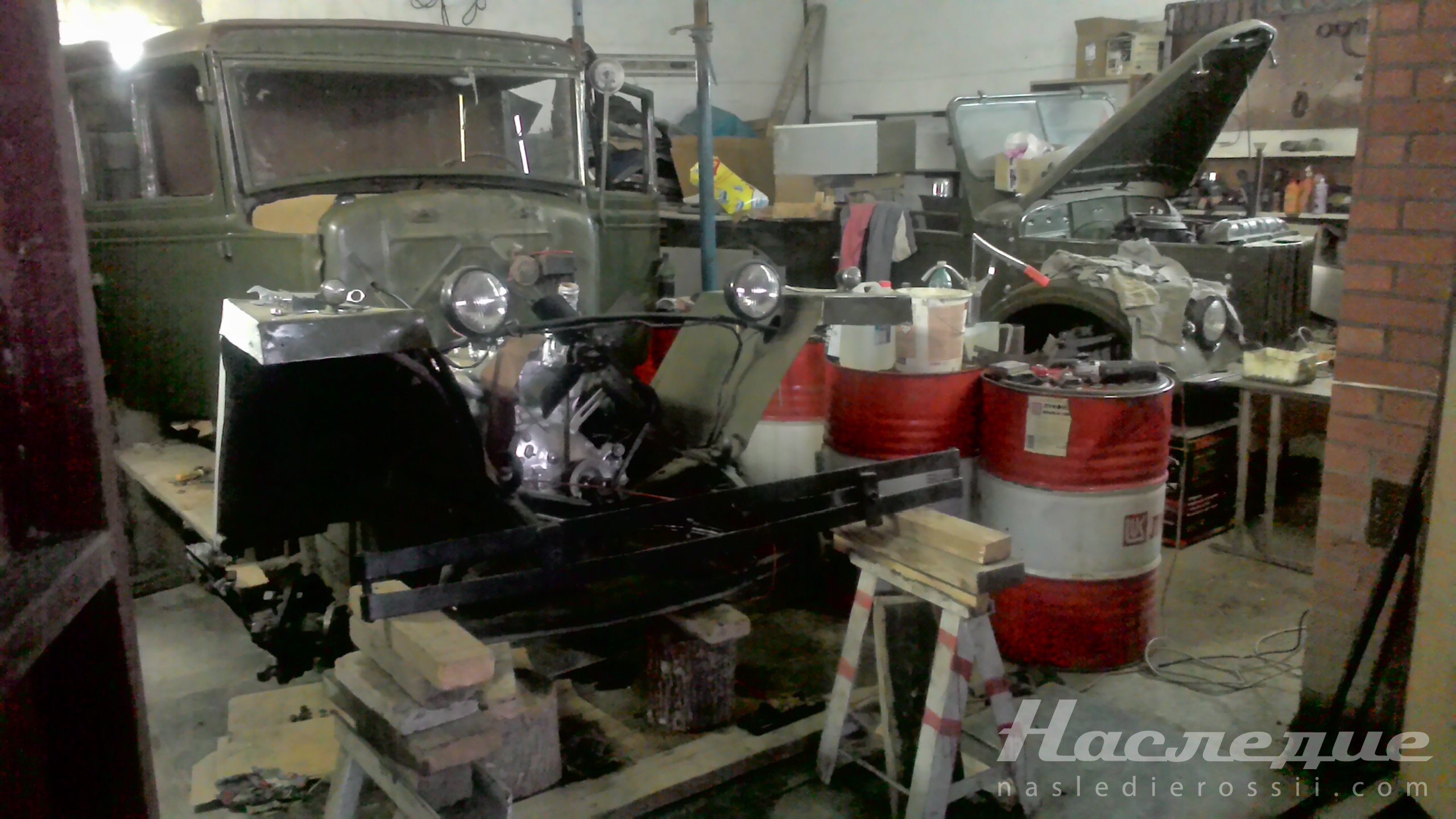 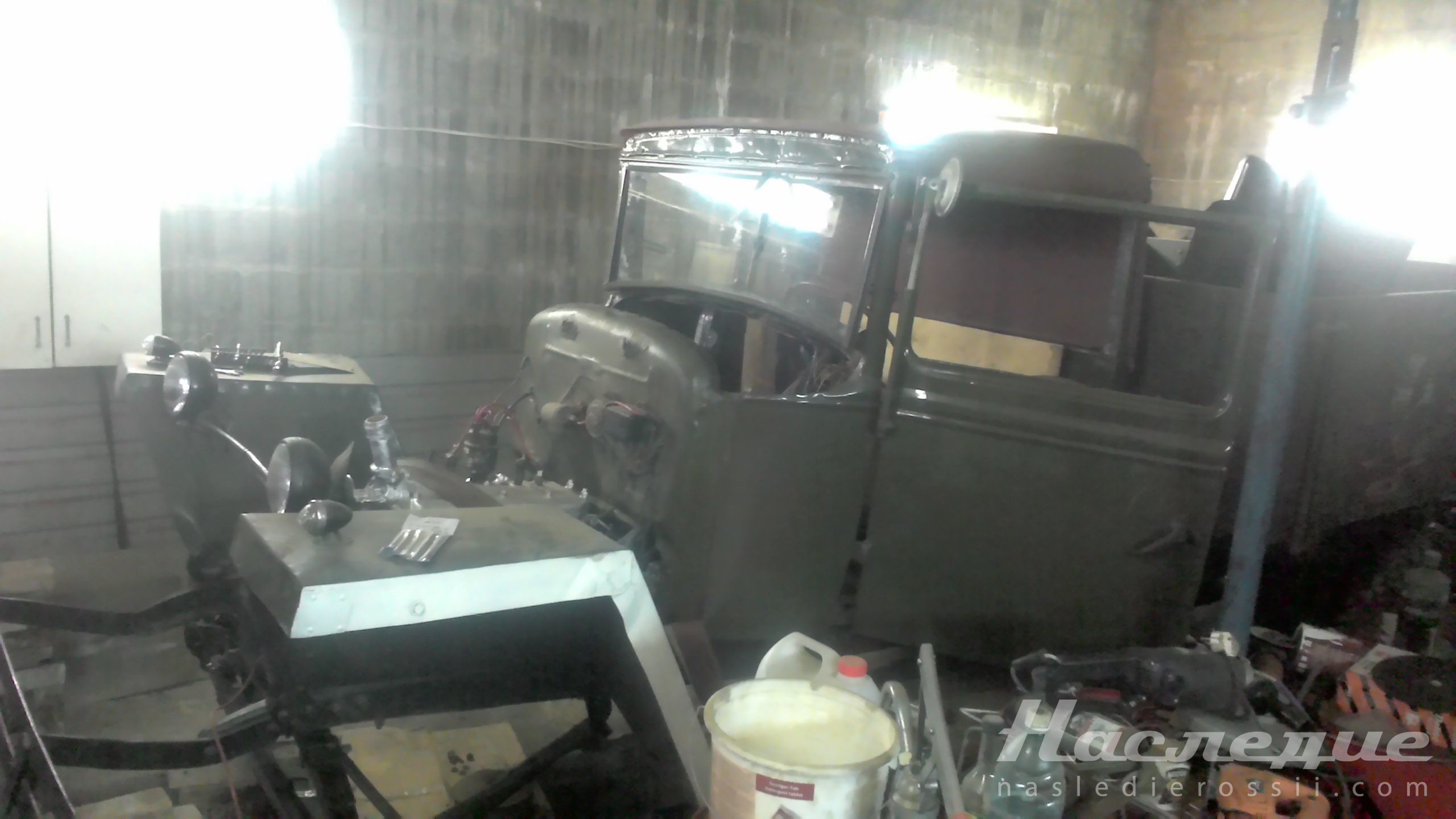 After purchasing the car, the first thing raised the front beam and engaged in the replacement of two bursting sheets of the front spring. In the photo this is the second and third sheets below. Springs picked up from the bus GAZ 53, though they had to be reduced, since they were 1.5 cm wider. 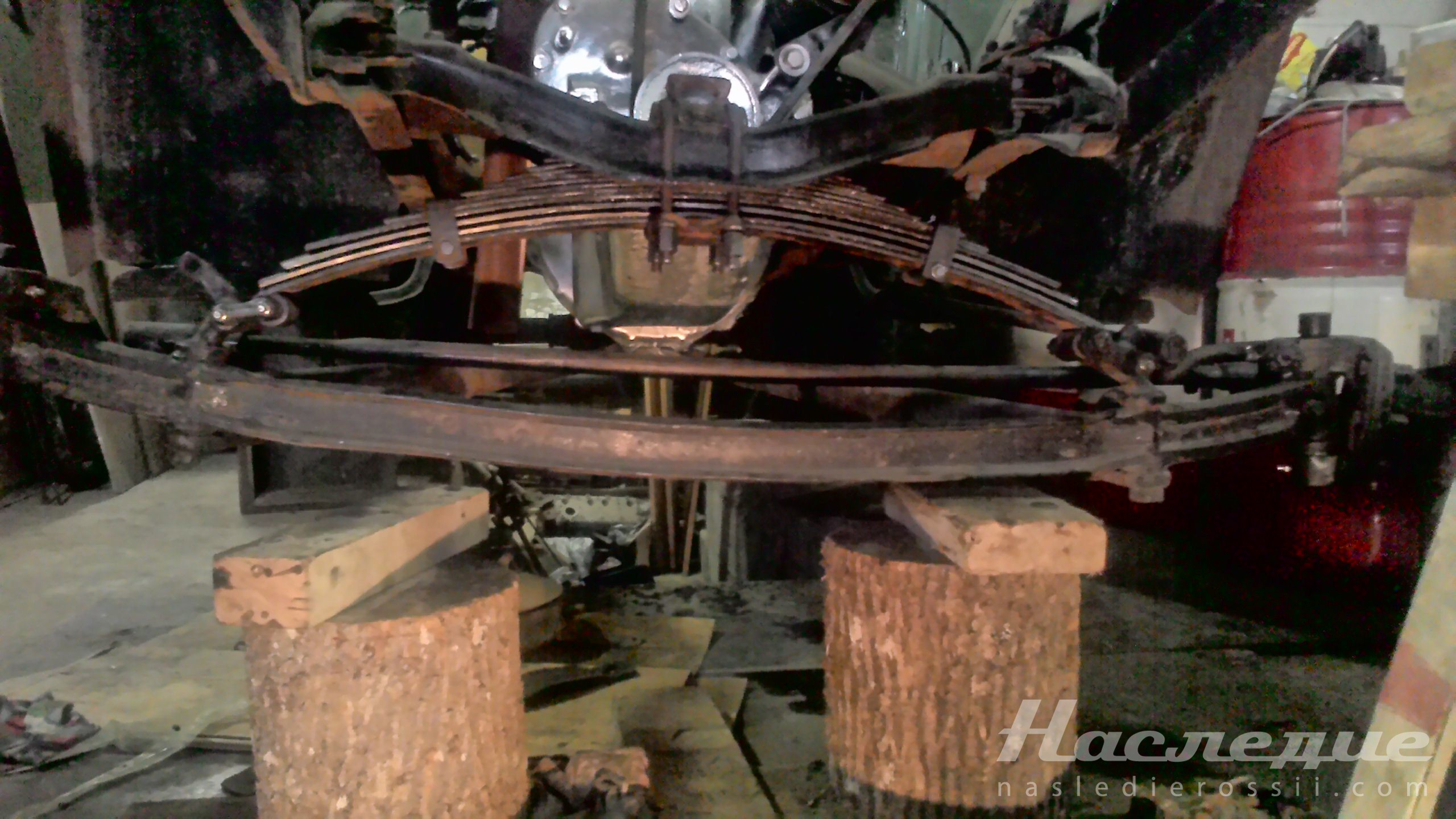 Next engaged in the front brakes. We coped with them quickly enough, because they are not. The truck has worked from 1943 to the end of the 80s without front brakes! The fact of the matter is that in wartime the cars were produced in the most simplified configuration, because at the front, the life of most trucks is very short. They took volumes – a lot of simple and unpretentious cars. 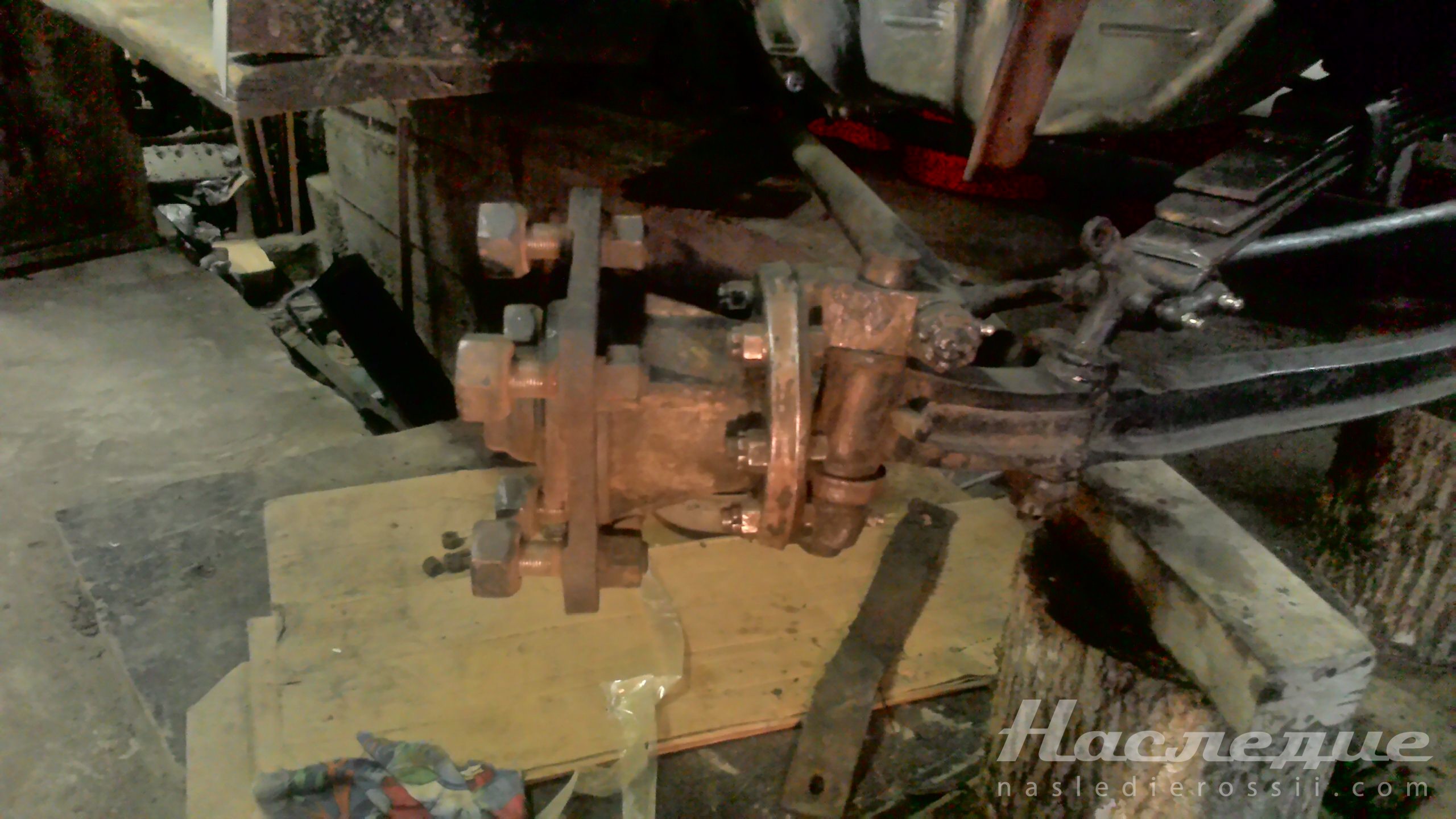 But the car continued to surprise us again and again: all three – the gas pedal, brakes and clutches are located on the engine. What does it mean? This means that this motor can be pulled out of the padded lorry, put on any cart, and it will go. 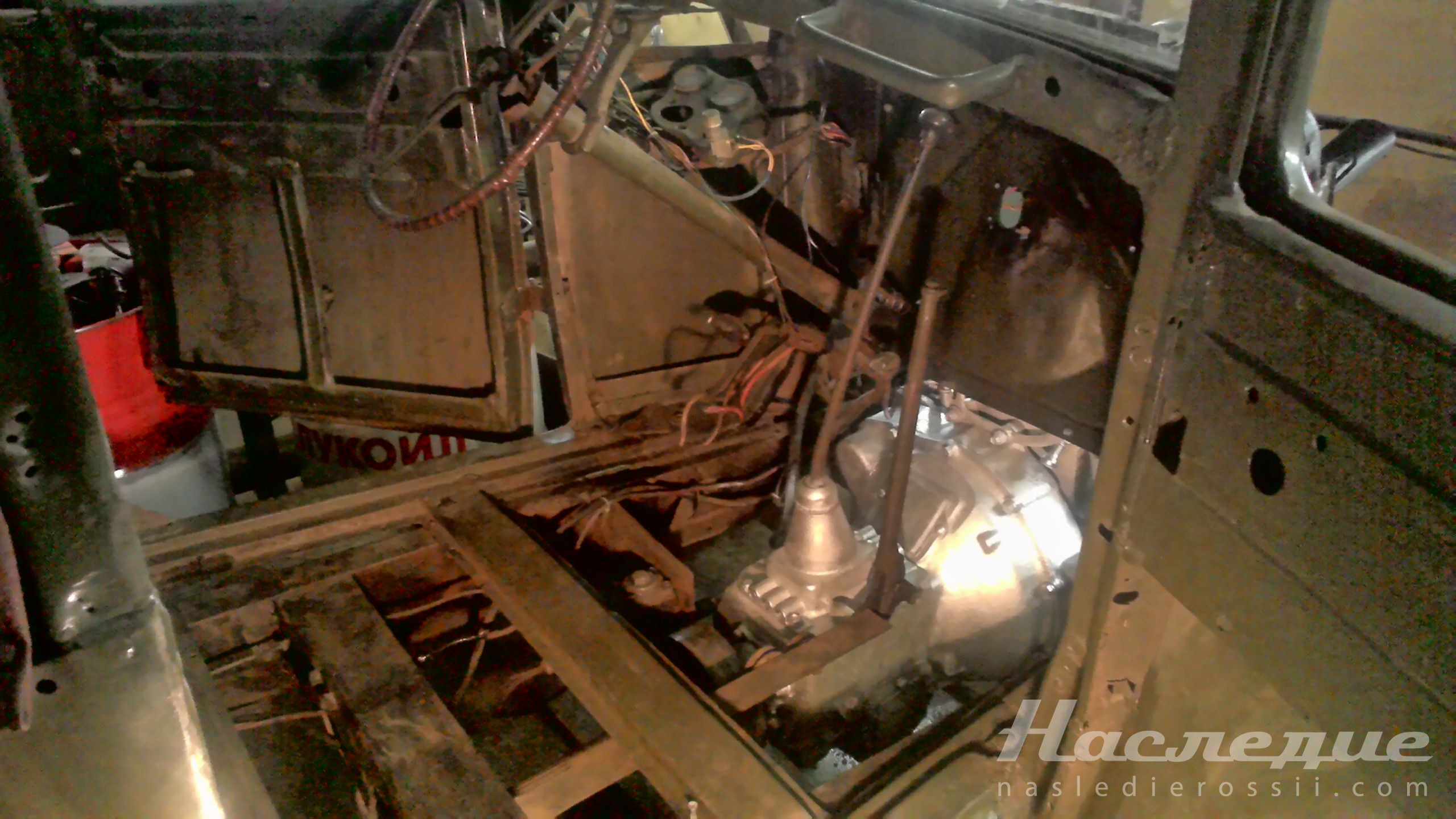 On the top photo you can see the hydraulic brake cylinder. This was done for safety reasons: at our carpentry, most likely in the carpool where she worked, we installed the rear axle from the GAZ 51 car with hydraulic brakes, because mechanical brakes were on the trailer, whose reliability left much to be desired: traction pulled out and burst. Turner told us about this, Ivan Vlakhov, who in his 86 continues to work on a lathe. For clarity, he showed us how he repaired traction on GAS AA and ZIS 5, welding them on a lathe:

In the process of restoration, we did not strive for the ideal. There is a saying “Scars adorn a man,” so we saved some defects to show the younger generation what this machine went through. All the more surprising is the fact that just such a primitive machine, designed in the early 30s, became the main means of delivery for logistic support, the “Road of Life” for occupied Leningrad and the evacuation of the wounded. The following photo shows the broken frame under the passenger door, which was reinforced with a welded steel angle: 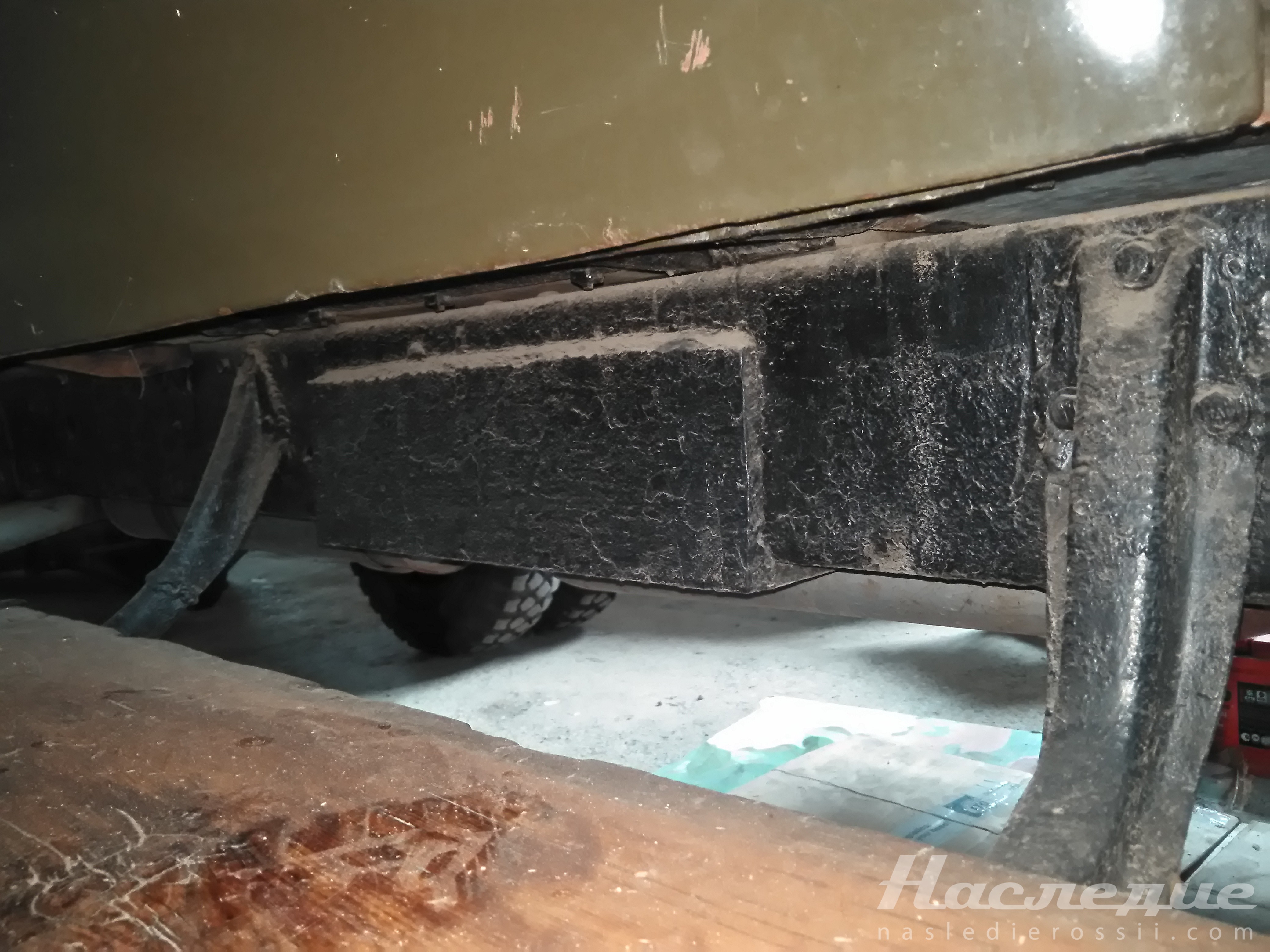 In the cab itself, in the driver’s side, we found a charred piece of wood. This can only say one thing – the car was on fire. It happened in wartime, or later – is unknown. It is important that the car passed through the fire, and in spite of this it is still in service. 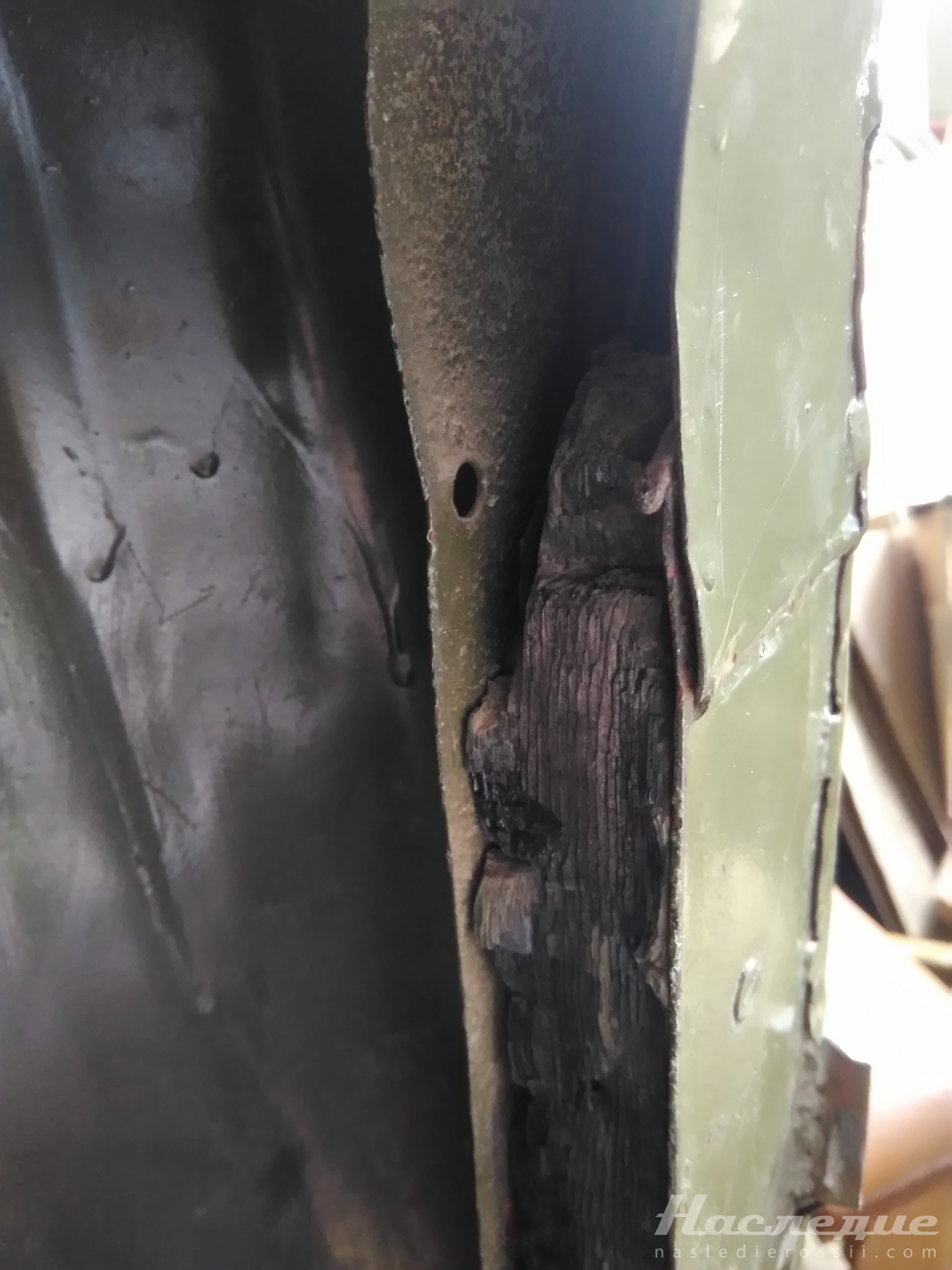 We should also mention the fuel tank and its location. The tank is located in the cab above the driver, which is not very safe from the point of view of safety, especially at the front: 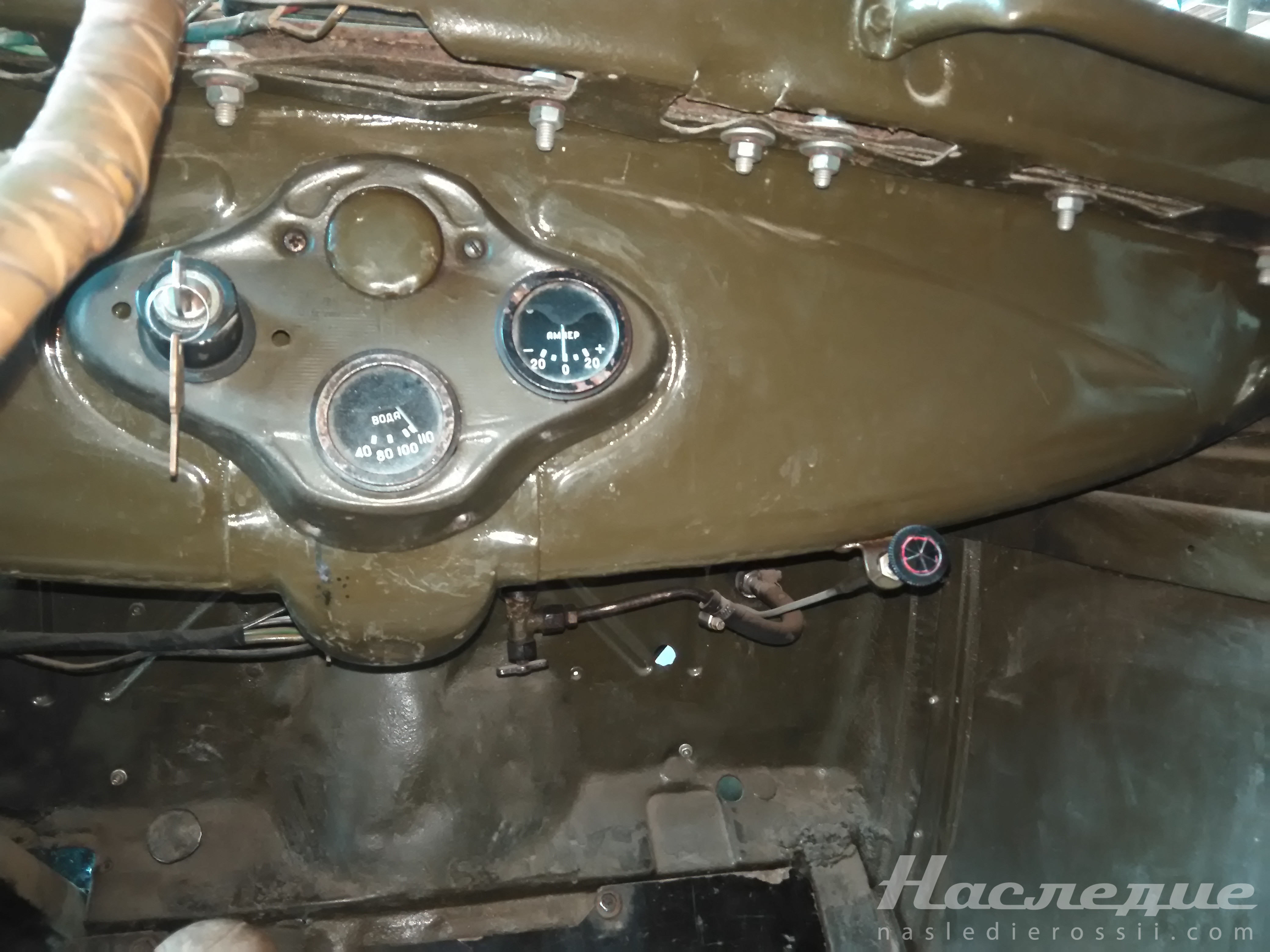 And it was done this way, because GAS AA does not have a gasoline pump, gasoline enters the carburetor by gravity, which, by the way, is not located on top, as we all used to, but from the bottom. (photo is not ours, taken from the Internet for example) 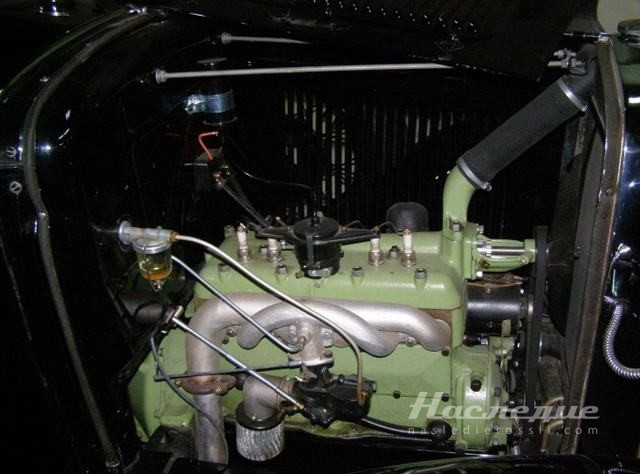 The tank itself, of course, rusted through. He had to take out and brew.

In the following photo you can see the location of the tank: it is inserted right in front of the windshield: 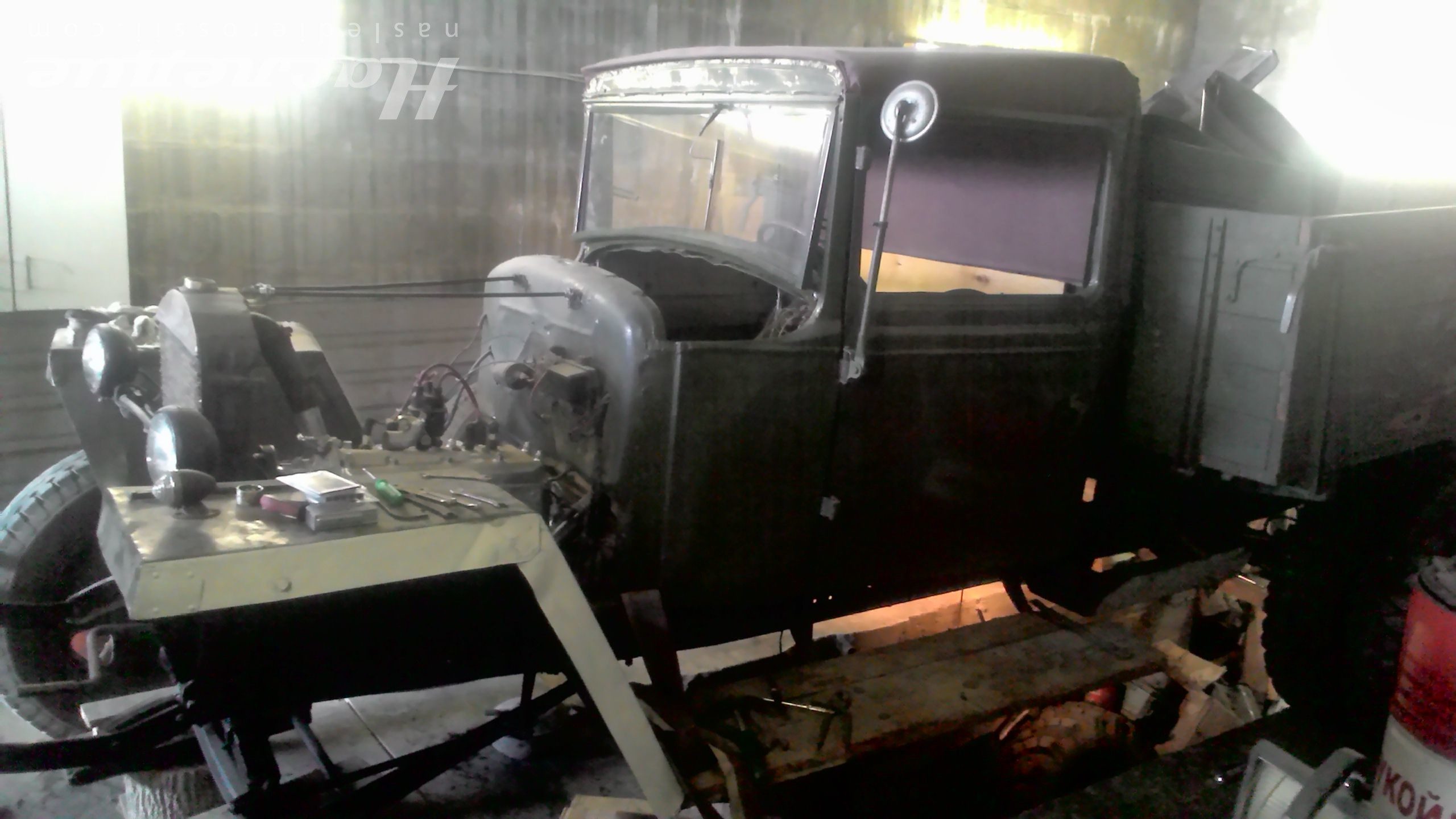 They made the seat, replaced the brake hoses, fenders, grille and hood repainted, native steps cleaned and varnished, it was not without difficulty that the engine started. And on December 26, 2015, the first exit of the lorry finally took place: 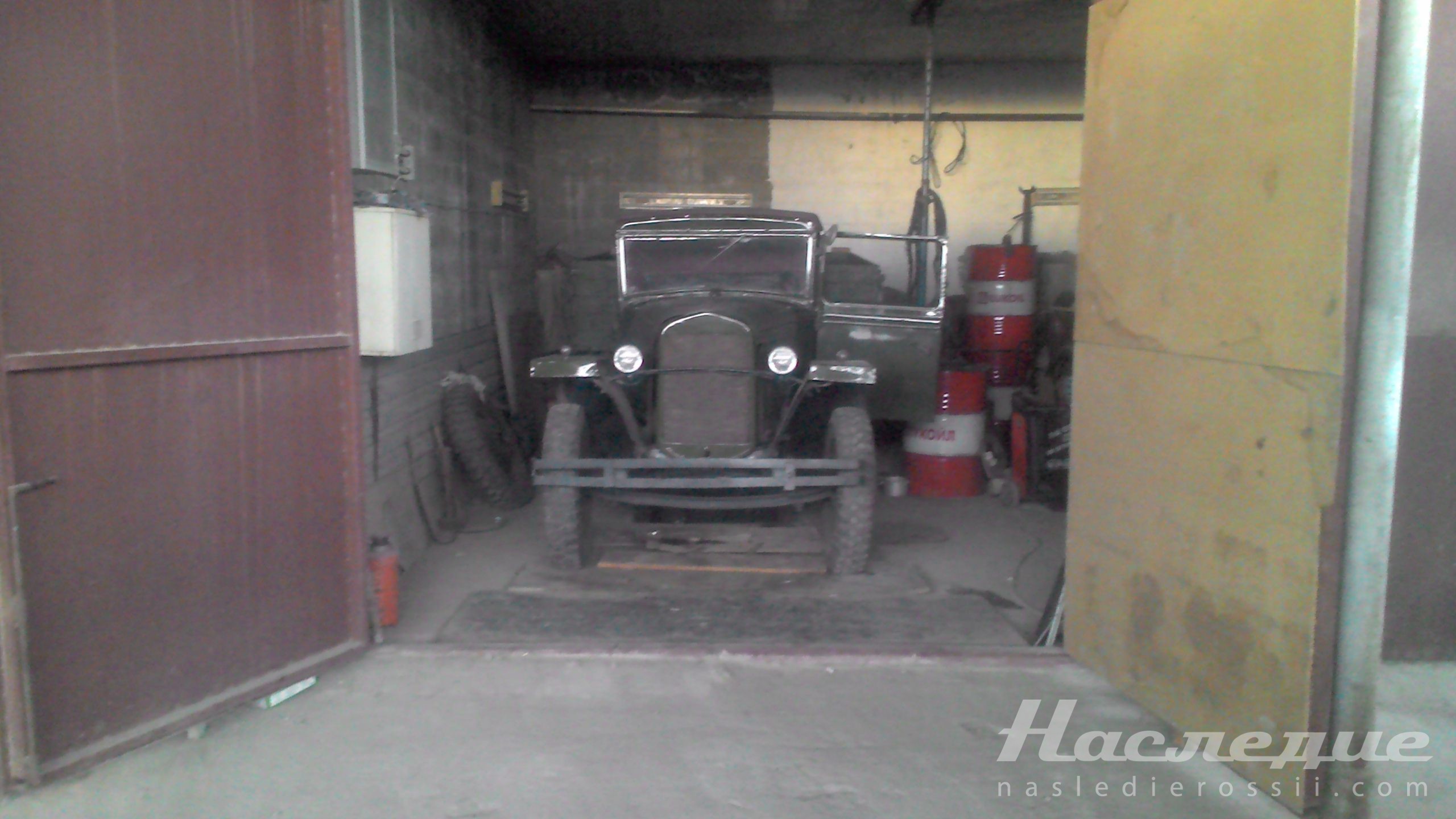 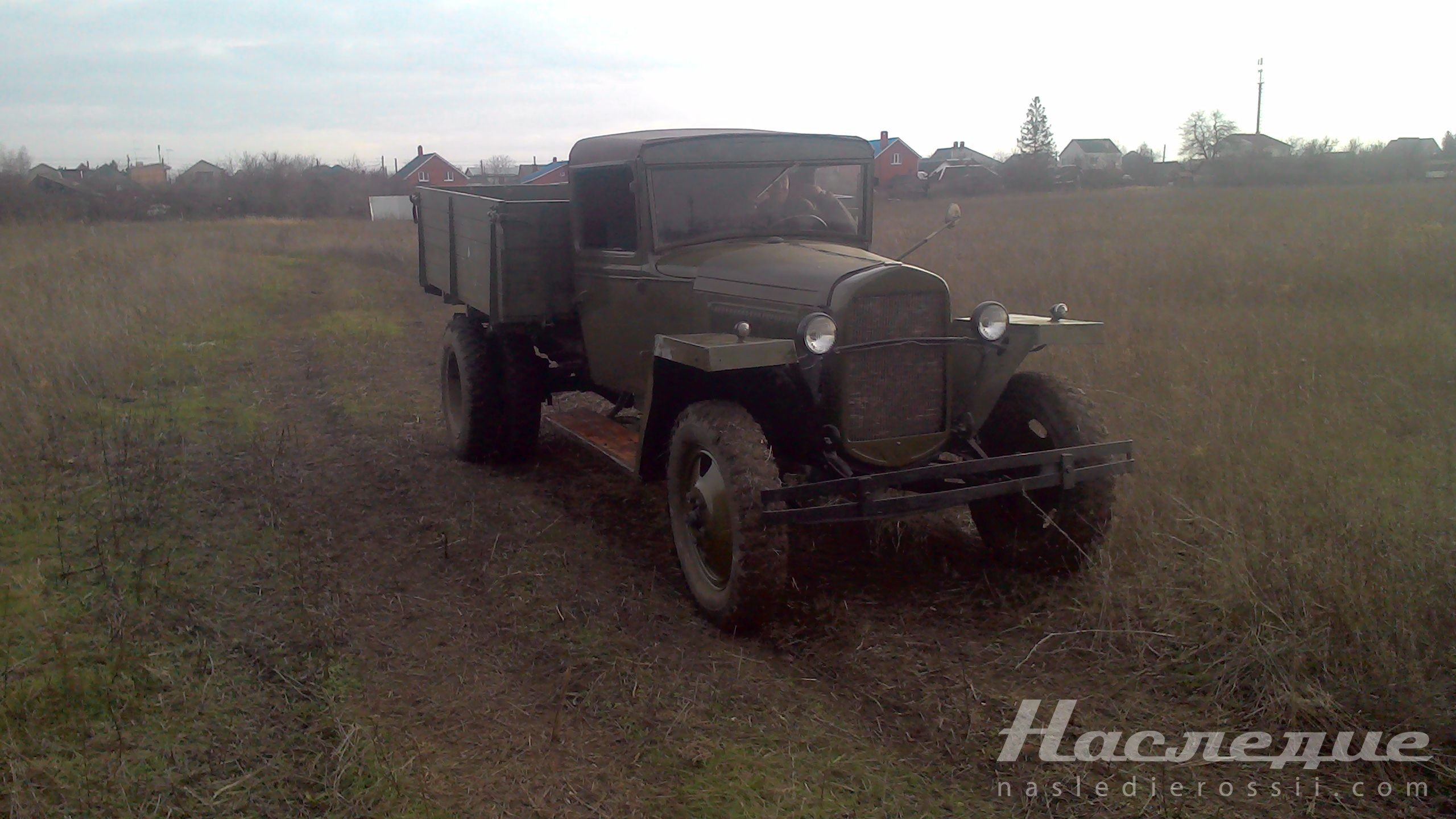 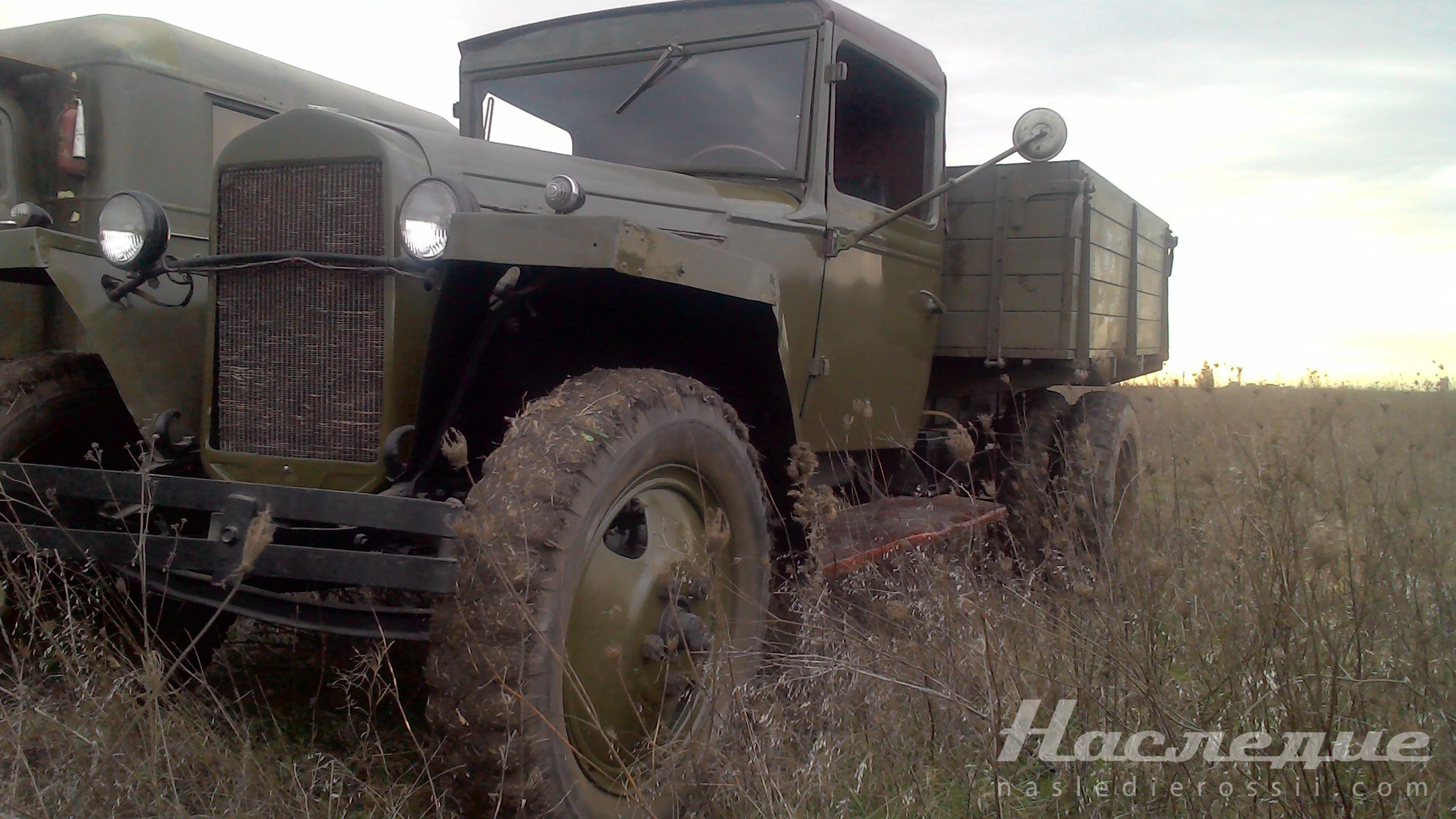 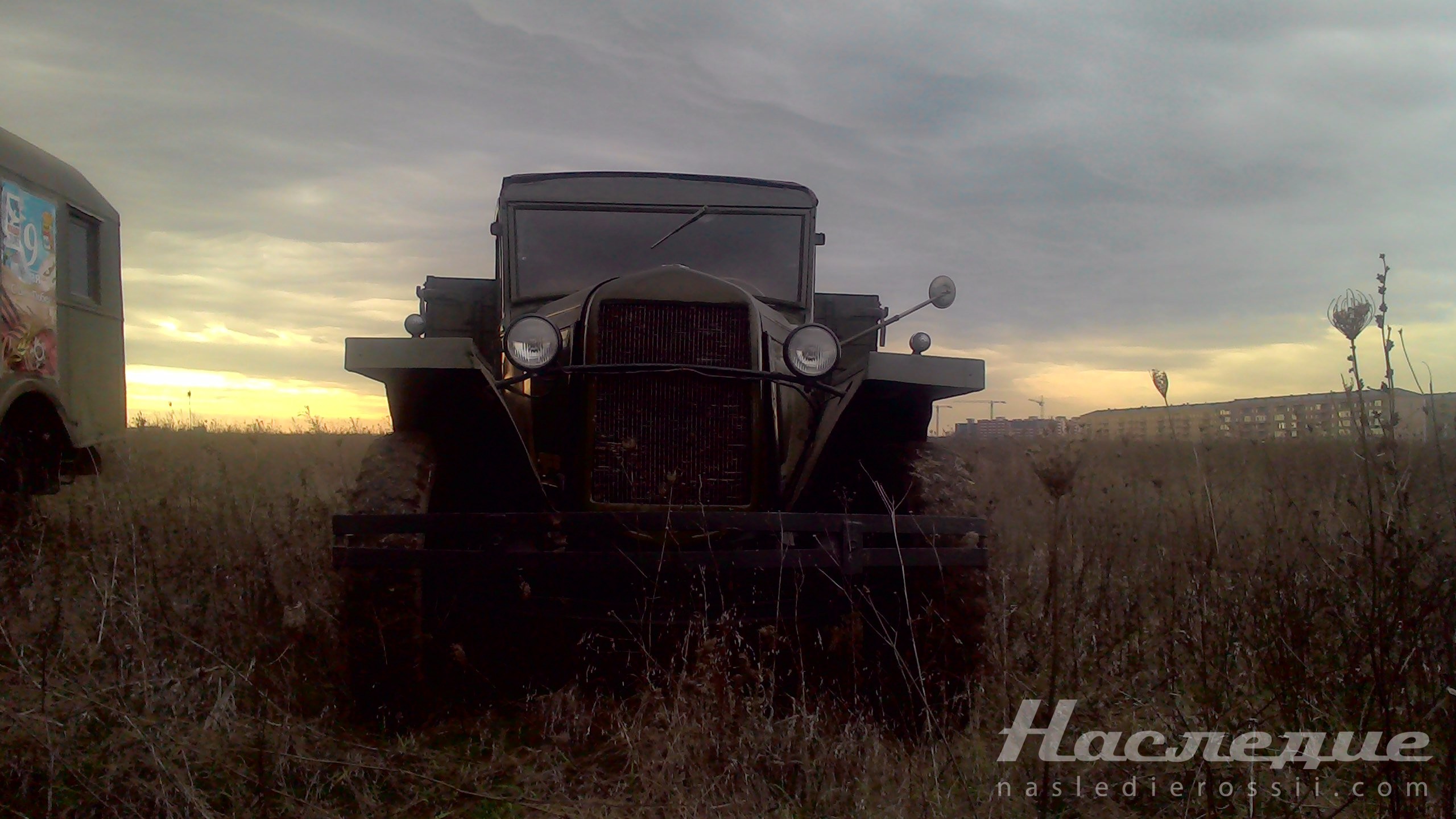 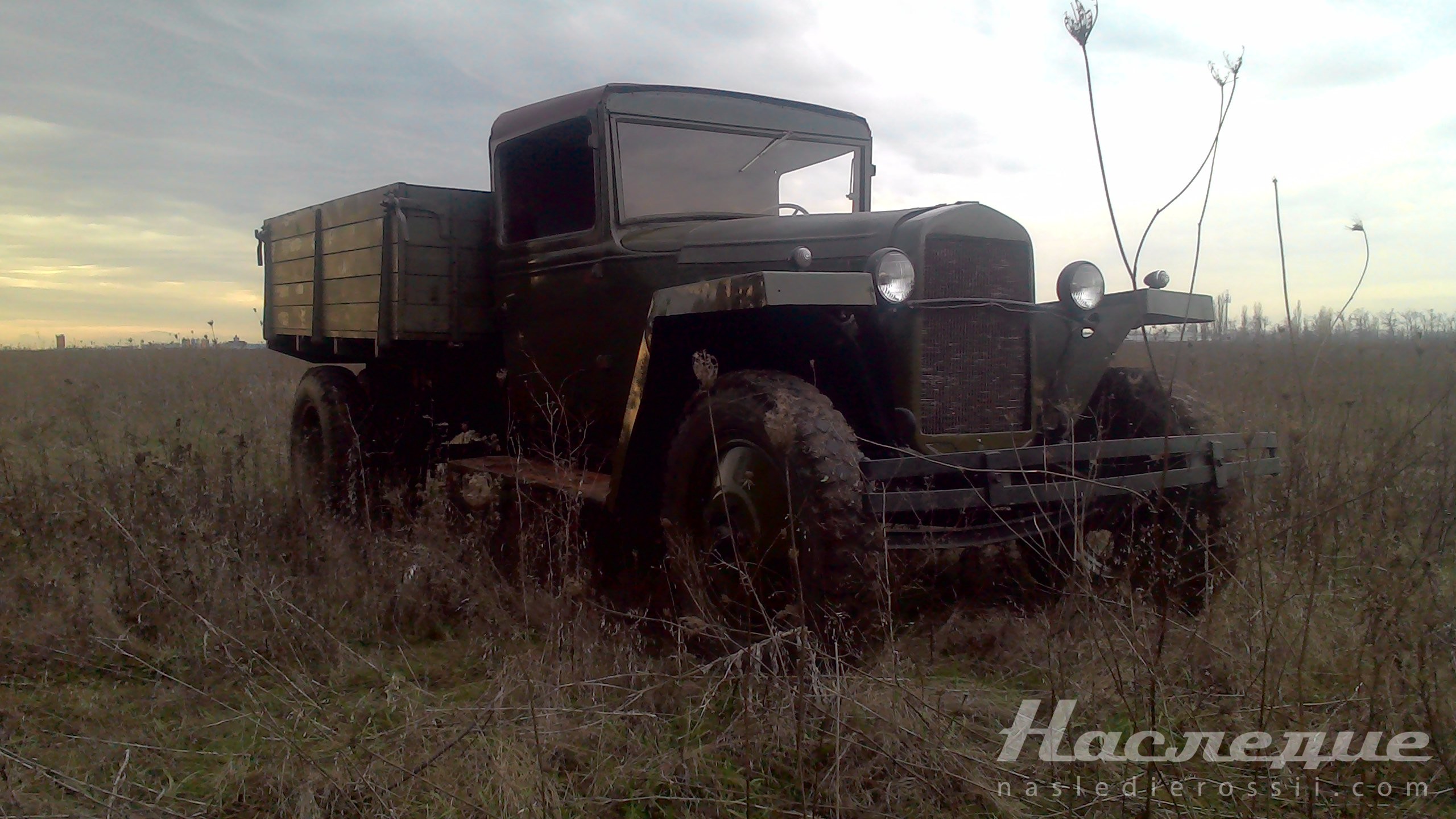 In the photo is Ivan Vlakhov, a turner who advised us on the GAZ AA device. He not only repaired these cars, but also worked for them. All the more invaluable was his experience for us. 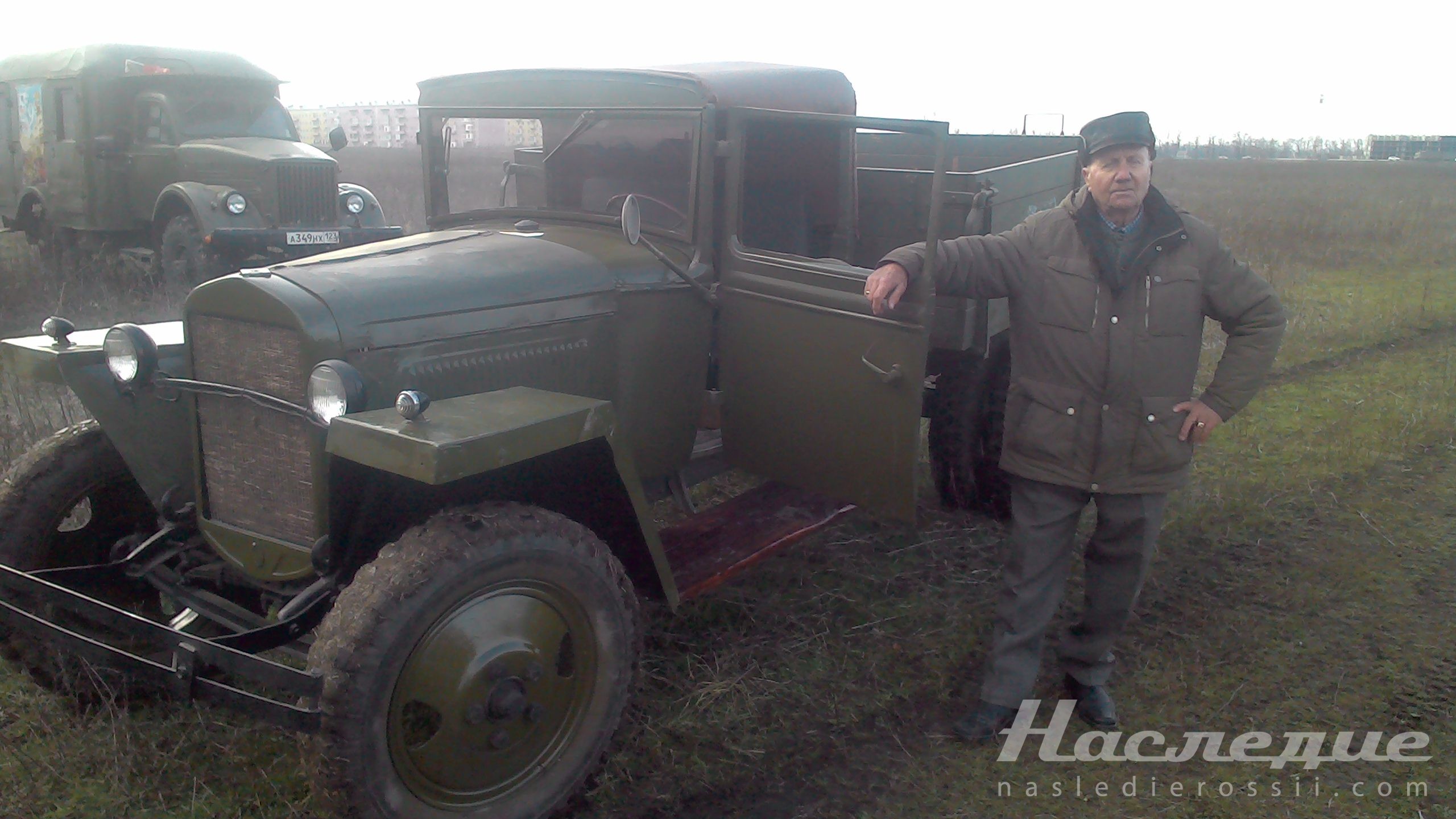 There are moments about which it is impossible to read in the books. For example, for a driver more than 170 cm tall, it’s not so easy to fit in a lorry: 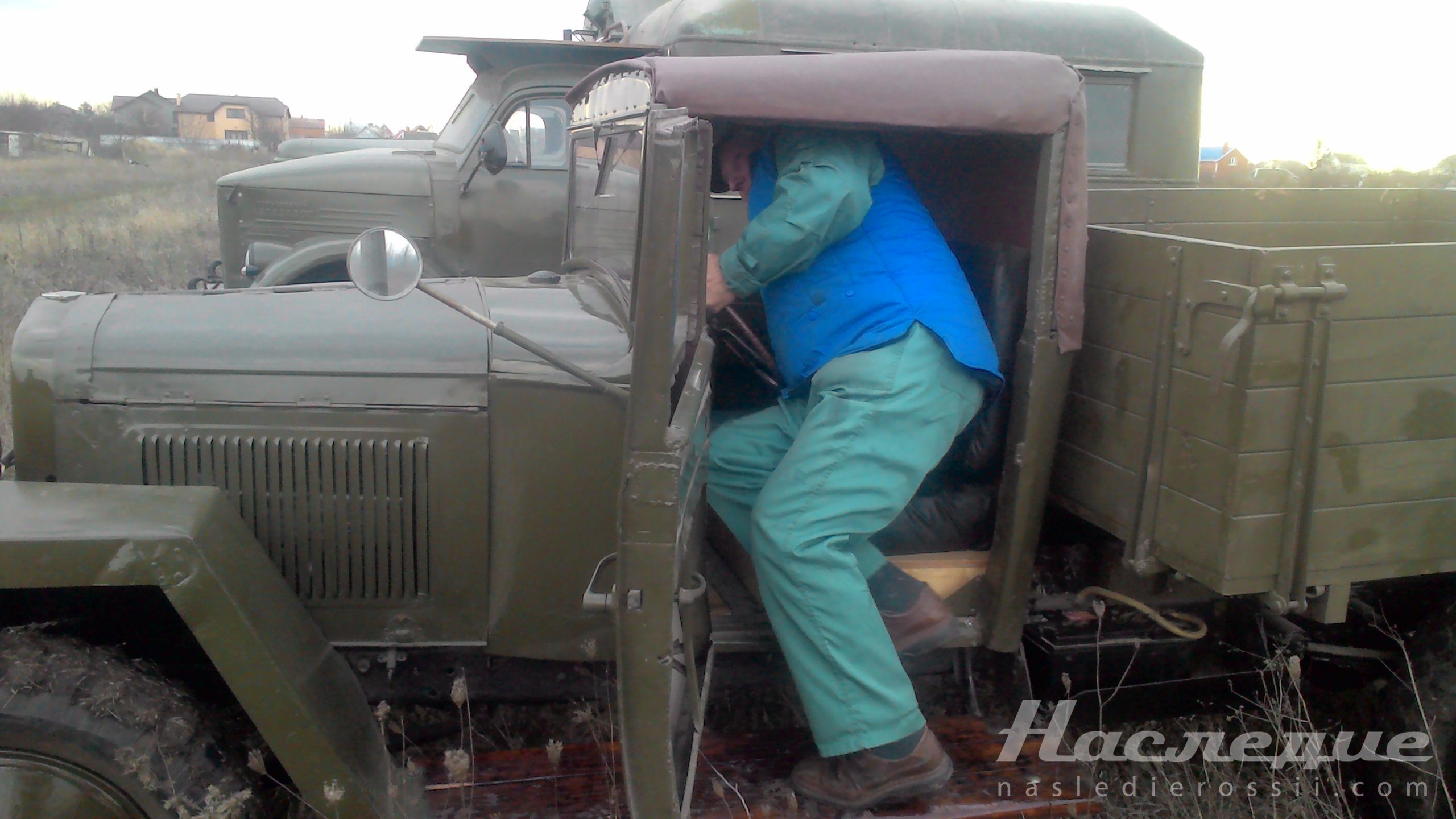 Checked and hydraulic brakes. If there were traction, the braking distance would be much longer. Yes, this is not the original, but on it you can go on public roads, participate in parades:

On the same day, the Kuban All-Russian State Television and Radio Broadcasting Company shot a report on GAZ AA:

Late December sun reluctantly cuts through the lead dome of the Kuban winter.

Only the measured gurgling of inline-six breaks the already oppressive silence of the unplowed field.

Mastodons, like ancient lizards, waking up after a secular dream, slowly leave the field, taking their place in the ranks.

Time runs. Time does not heal, it teaches. Time teaches us to remember, not to forget; do not forget to know; know to use; use to move forward. Forward, dawn for a meeting! 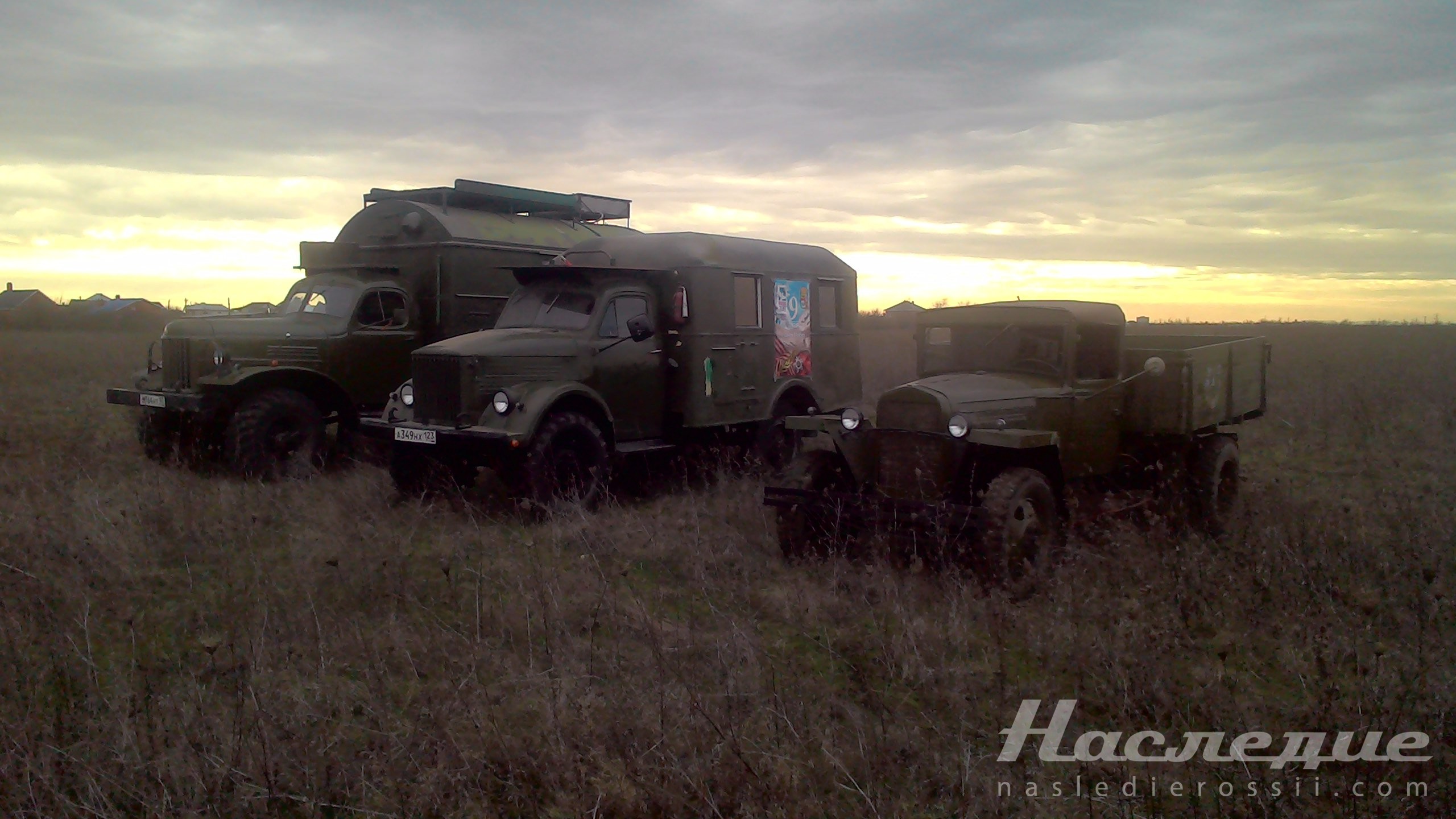 A little later, on the Internet, I found the following model, GAZ AAA, and for our lorry we made the same poster: 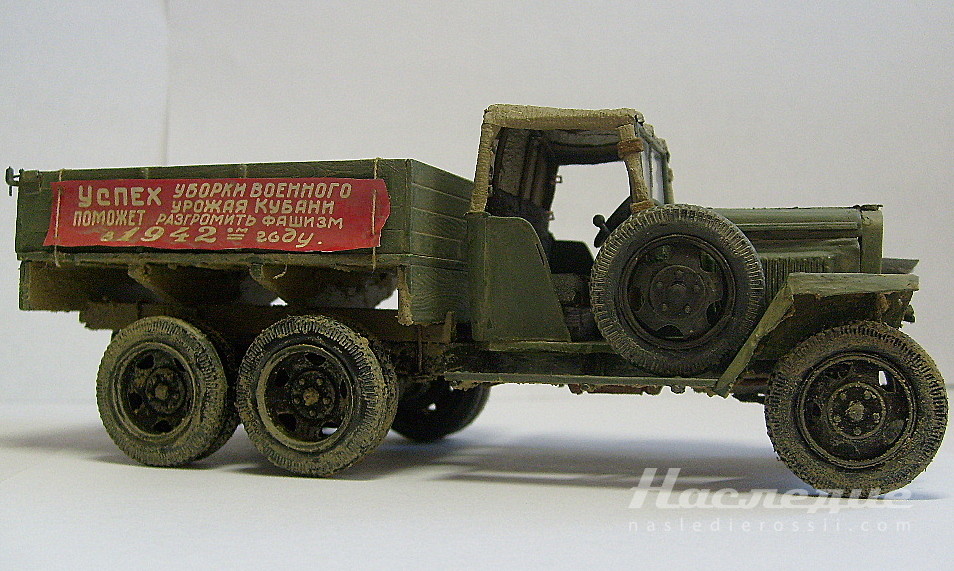 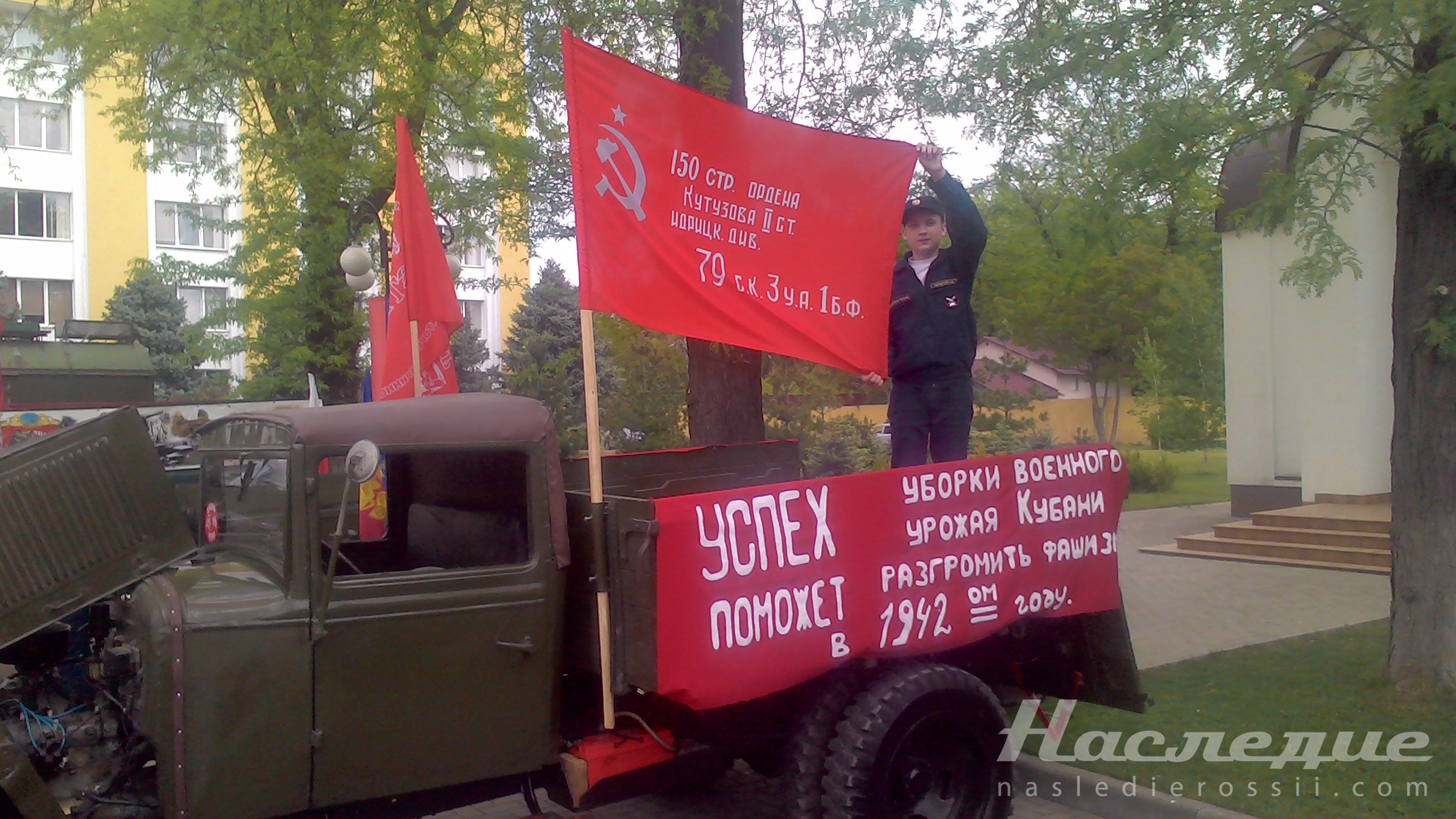 The presented photo was taken in the Presidential Cadet School, where we have been driving a column of retro equipment for the third year. 800 boys have a unique opportunity to see live and even sit in the technique that went through the war, as well as in those who changed them: GAZ 51, GAZ 53, GAZ 69, ZIL 157: 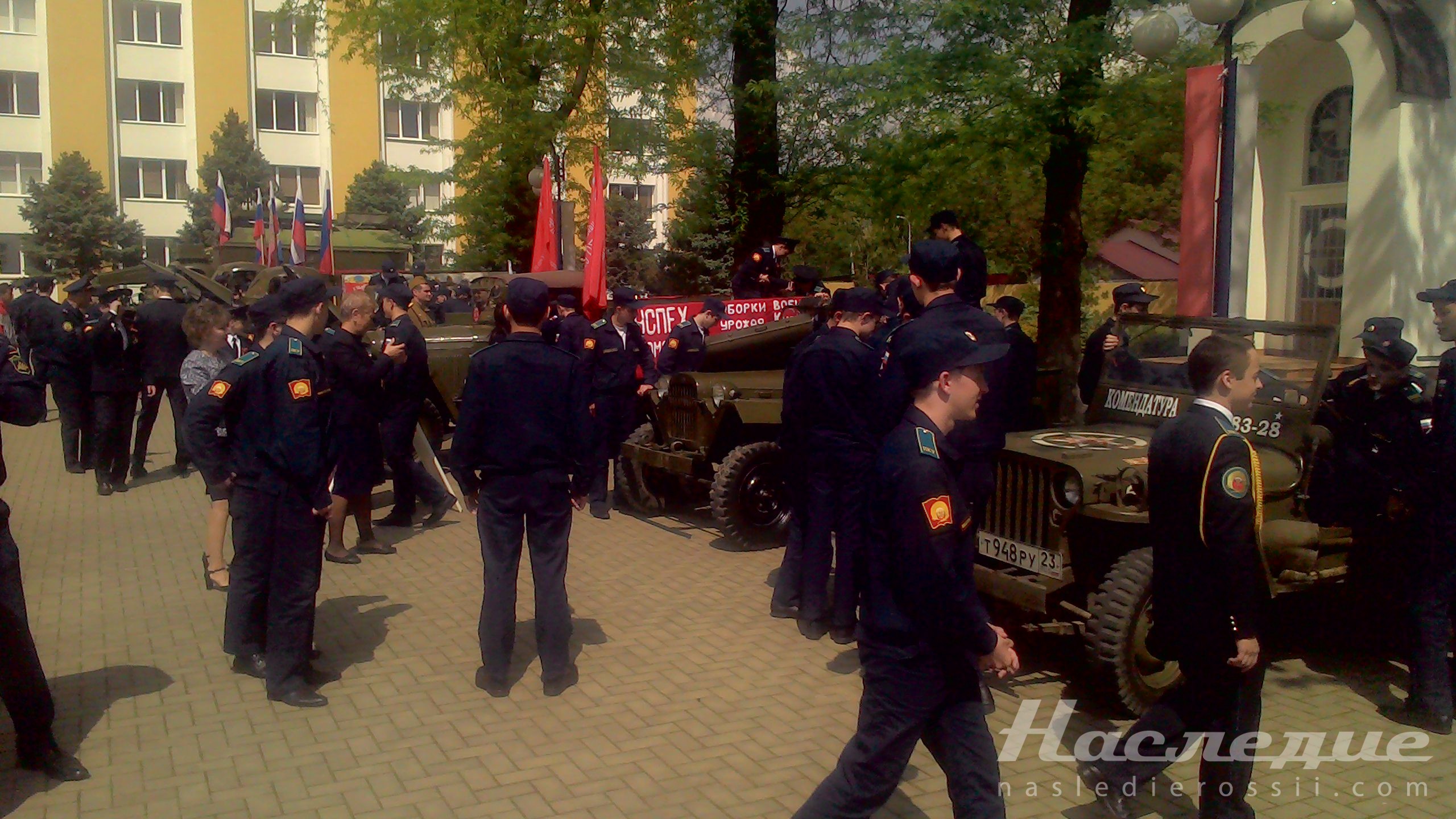 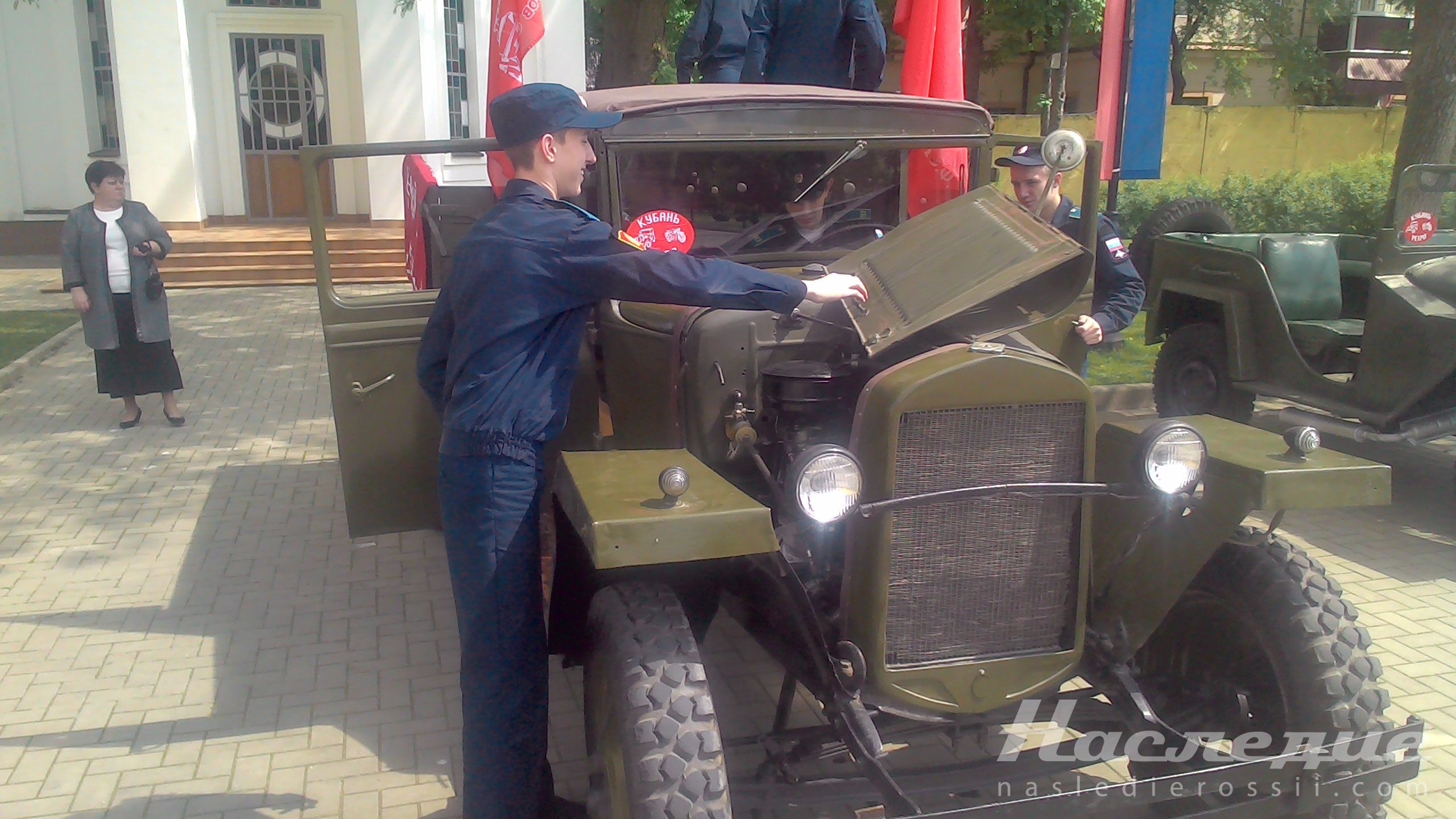 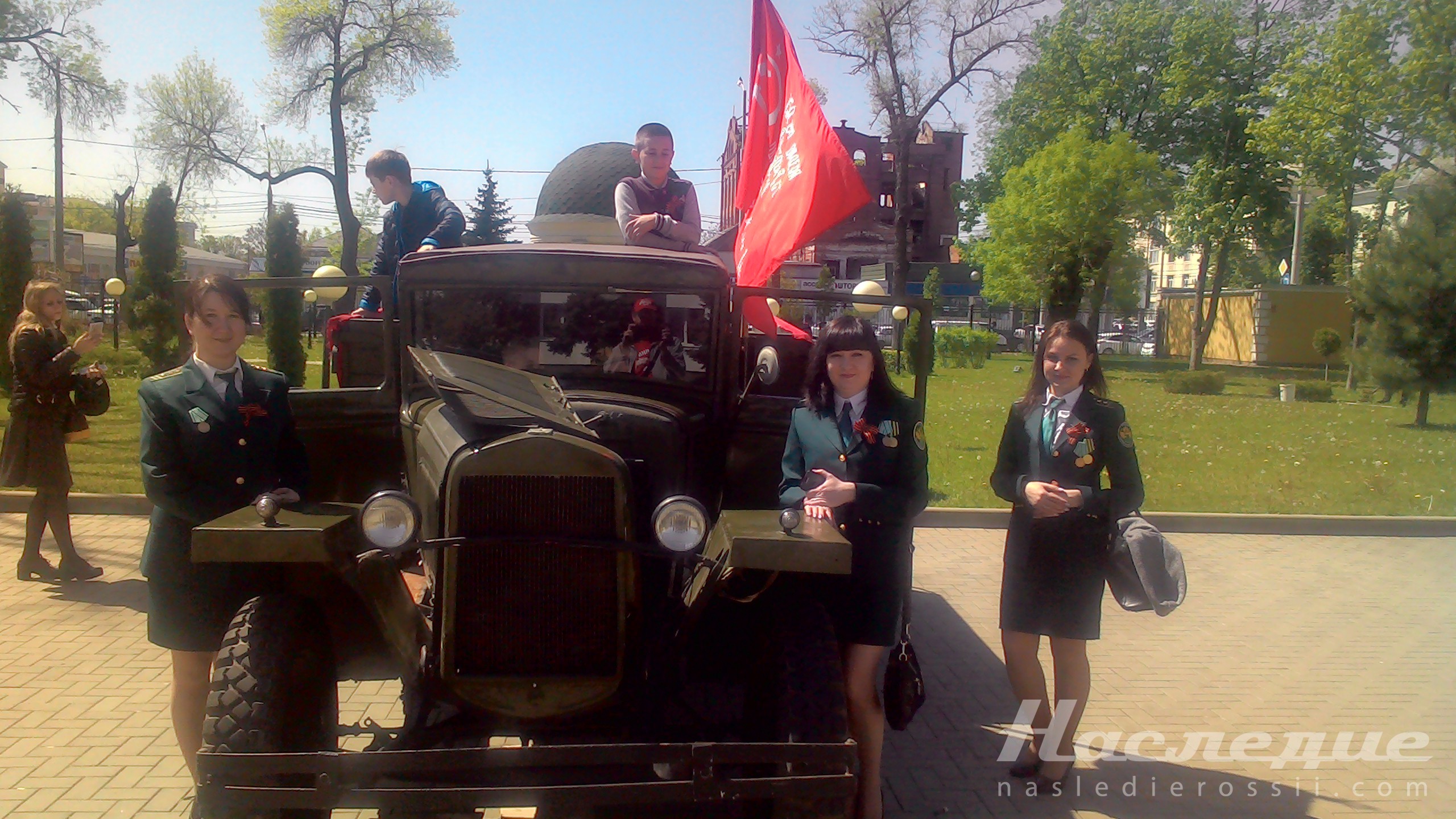 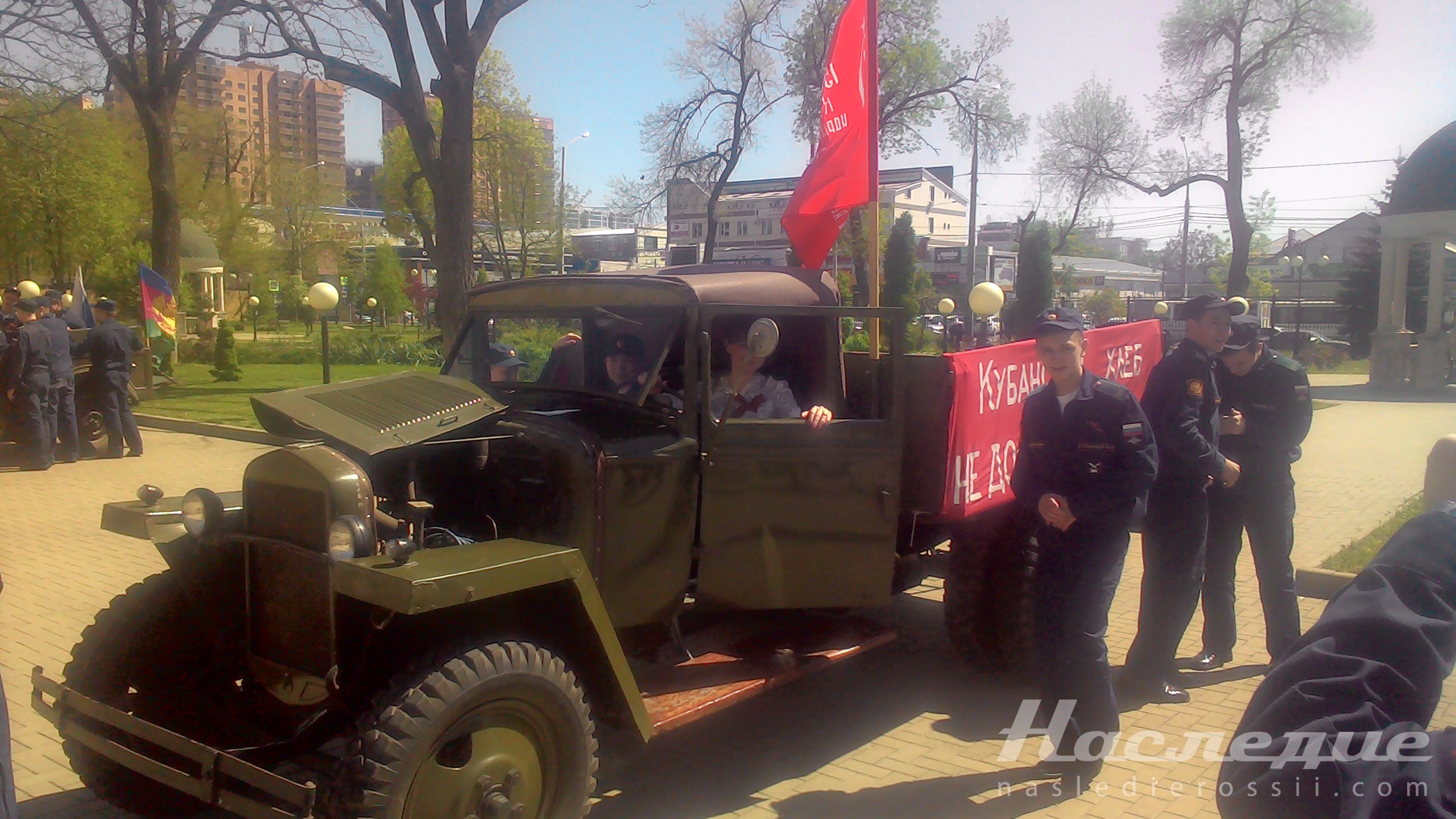 I conclude the story about the GAZ AA car with a photograph, for which restoration work was carried out – the Victory Parade on May 9th. 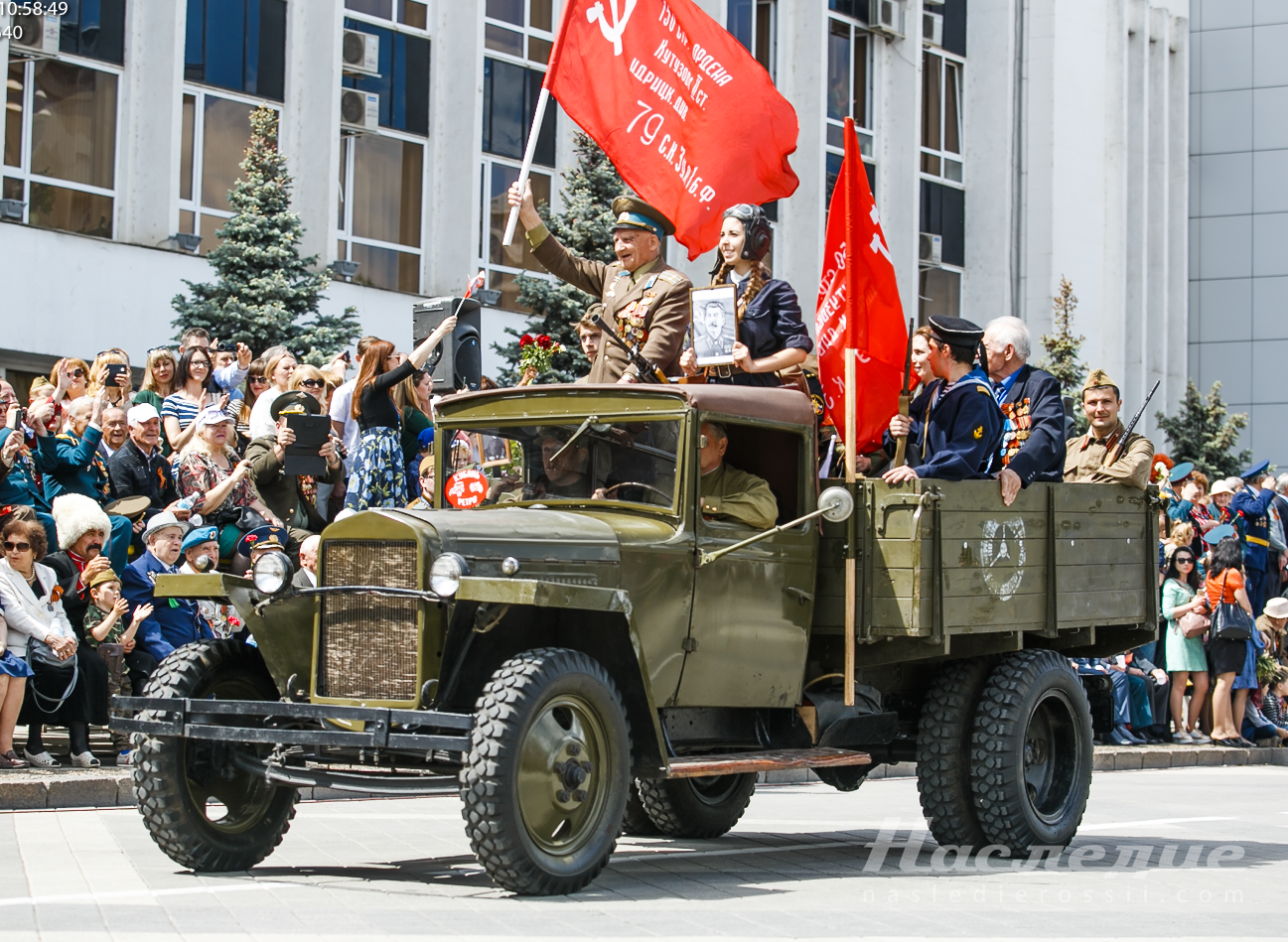